At our first workshop about Identity and Heritage we had 20 attendees including guest speakers Sandra Scotting from Stairway to Heaven Memorial and Tim Band, a local artist.

We would like to thank everyone who attended with special thanks to Kerry, Francesca and Martyn from Bamboo & Bee for accommodating and hosting our first workshop.

It was great to see some well-known friends of Roman Road Trust as well as meeting many new faces.

We heard from many local residents who shared their stories and thoughts around the identity of Globe Town as well as contributions from Sandra Scotting from Stairway to Heaven and Tim Band, a local filmmaker.

The group was shown two films by Tim Band: a local artist and filmmaker. The first film ‘Sheltered Lives’ featured the first-hand experience and words from local survivors of the disaster. The second film ‘At Their Mercy’ touched upon housing issues in the area through the voices of those affected.

Sandra Scotting updated the group of the recent developments and proposals for the Stairway to Heaven memorial, which is located directly outside Bethnal Green Tube Station. It is hoped that the unveiling of the memorial will coincide with its completion before the end of the year.

After the opening session, attendees were invited to answer five questions on heritage and local culture. Responses were used to start an open discussion facilitated by Neba Sere (our Community Engagement Coordinator) that raised various opinions and thoughts.

Many attendees said that the multi-cultural nature of the area was one of its main attractions. One of the most notable discussions was around the identity and naming of the area. The majority expressed that ‘Bethnal Green’ was their preferred name, and a few like to call the area ‘Globe Town’. One attendee suggested the area should be known as ‘Bethnal Green East’. No-one felt a close connection to ‘Roman Road’, despite that being the name of the town centres high street. They all associated Roman Road with Roman Roman Market in Bow.

As discussions progressed, the group questioned the naming of the Market Square. The council’s chosen name of ‘Roman Road Square’ was not popular and attendees proposed the name of ‘Globe Town Market’ or ‘Green Street Market’ alluding to the original street name in 1940s.

The group highlighted The Camel, Eastbourne House, Elizabeth Fink statue, The London Buddhist Centre, Cranbrook Estate and Tramshed Community Centre as buildings central to the heritage of the area to be named and saved.

Many attendees expressed strong feelings towards the heritage and history of the area as well as the many green spaces such as Meath Gardens and Cranbrook Community Gardens. Perhaps this explains why attendees could easily decide the colour of Globe Town (or Bethnal Green) to be green, also the colour featured on the iconic Cranbrook Estate towers.

For the next sixth months, Roman Road Trust will be helping to bring together the people of Globe Town to form a common vision for the high street and the community it serves. We will be running a series of workshops on the first Tuesday of each month. Our next workshop will be on Tuesday 7 November and will be focused on Food & Markets.

Funded by the London Borough of Tower Hamlets as part of the Thriving High Street programme. 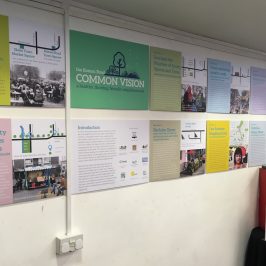 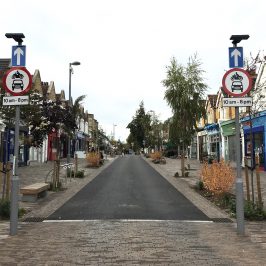 IN 2013 there was no Wikipedia entry for Roman Road despite its historic East End... 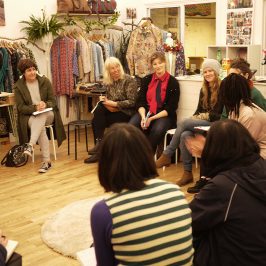 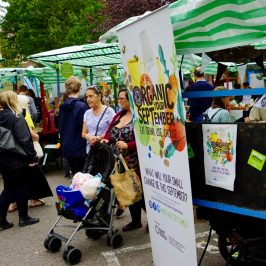