We asked nearly 300 local residents and businesses for their feedback about Roman Road Yard Market, a community-led market that operated on the Roman Road car park for a six month pilot in 2016.

One of the aims of the market was to raise the profile of Roman Road and attract destination visitors and increase footfall to the high street on a weekly basis. The other aim was to attract new traders to the area with the hope that they would eventually feed into the existing street market on Roman Road, creating a more diverse offering in the long term.

At the end of the project in 2016, we asked local residents and businesses for their feedback.

How often have you visited Roman Road Yard Market?

This result is reflective of the ‘newness’ of the market. Whilst some visitors regularly attended the Yard Market, others had only visited once or twice. This may have been due to a lack of awareness that the Yard Market was happening. 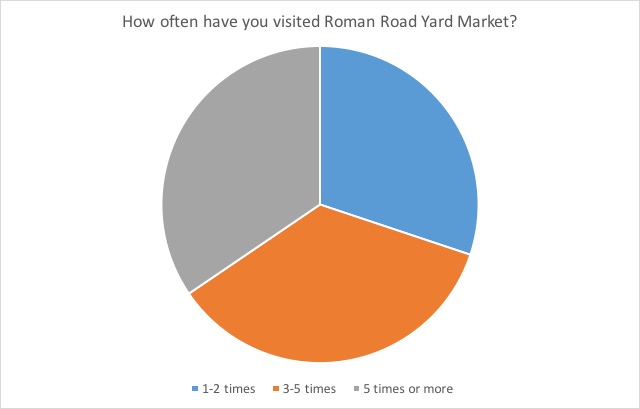 What do you like most about Roman Road Yard Market?

Overall most people said they enjoyed the community vibe of the Yard Market as well as the market stalls and food offering. The results show that visitors were more drawn to the community atmosphere and the stalls rather than workshops or events. 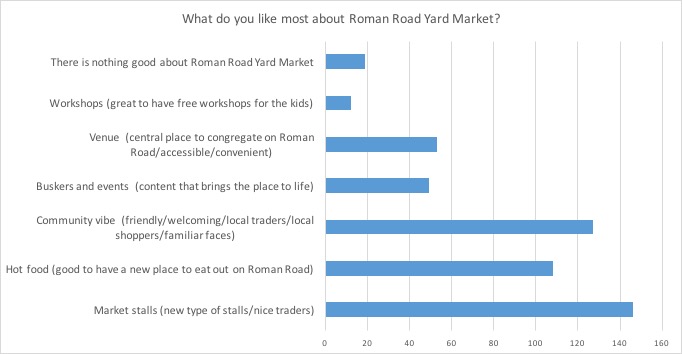 What do you like least at Roman Road Yard Market?

Although our results showed that visitors enjoyed the stalls, the Yard Market could have been improved by having a larger amount of stalls. This was shortly followed by the types of stall. This suggests visitors are looking for more stalls and a wider variety.

Overall, do you think Roman Road Yard Market is a positive addition to Roman Road?

The feedback shows an overwhelming response for the Yard Market as a positive addition to Roman Road.

On what day would you be mostly likely to visit Roman Road Yard Market?

Many responses showed that Saturday was the preferred day. However, the majority expressed no preference. 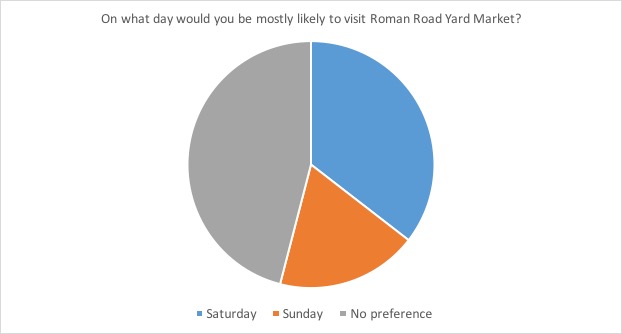 Community market or car park. What is the best use of the space on Saturdays?

Out of the 250 responses, 169 people said the space is best used as a community market on Saturdays. The lack of concern at the removal of the car park suggests most visitors to Roman Road market either walk, cycle, or use public transport to travel to Roman Road.

Which type of shops do you think Roman Road lacks?

We received a wide range of responses to this question. However, most people said Roman Road lacks fresh, independent, food stores such as a butchers, fishmongers, delicatessen, and bakery. Out of these choices, the response of a ‘traditional English Butcher’ was most popular. This was shortly followed by a lack of places to eat and drink in the evening. Responses also included a fashion outlet suitable for men, women, and children as well as an art shop or bookstore.

I think Roman Road Yard Market is a positive thing because…

The outstanding response to this question was how the market created a friendly, community atmosphere in which local people and new visitors were brought together. Visitors to the Yard Market enjoyed having new and different stalls alongside the existing stalls in the main market. Among the responses was the positive effect of bringing new people to Roman Road and using the car park in a more community friendly way.

I think Roman Road Yard Market is a negative thing because…

Out of the responses, the biggest concern was that Roman Road Yard Market was not large enough or varied in its offering. Responses also showed a concern that the price of items was too high.

How frequently do you shop at stalls on Roman Road Market?

Responses to this show that most people visit the existing Roman Road Market at least once a week or rarely. 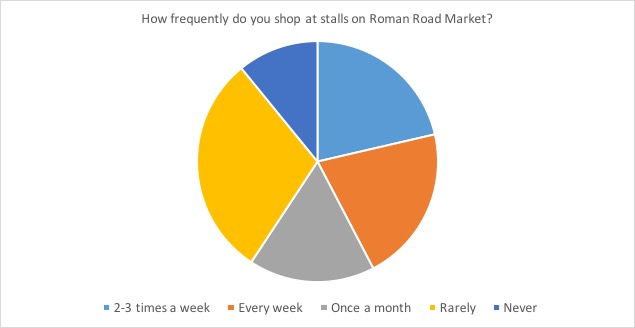 Which other East London markets do you visit most, if any?

Responses to this question were highly varied. The most popular choices were Brick Lane and Columbia Road. The second most popular market was Broadway Market with Spitalfields mentioned a handful of times. It is also notable that many people responded ‘none’ suggesting that many who attended the Yard Market only visit Roman Road Market.