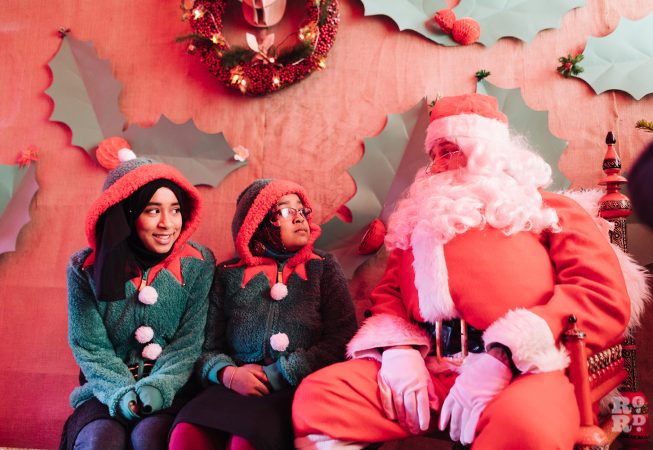 An annual event, Roman Road Christmas Fair takes place on the Roman Road car park. The adjacent Common Room (formerly Interact Hub) is converted into an outstanding Santa’s Grotto. The event animates the heart of Roman Road at the junction between Roman Road and St Stephen’s Road, uniting both halves of the road.

In line with all Roman Road Trust community events, the Christmas Fair is opportunity to celebrate and support local businesses and community groups. Local businesses provided the festive food and drink as well as the star prizes given out by Santa to the children. Residents at local elderly homes help wrap the presents for Santa’s bag and left over gifts are donated to Bow Foodbank. The live Christmas music was brought to you by local choirs, singers and players. Handmade decorations were made by children from local schools. The craft tent and letters to Santa stall were led by local organisations.

Unique to Roman Road Christmas Fair is the replica of the historic Clara Grant’s arch through which children pass to enter the grotto. This is a reference to the Bundle Woman of Bow who gave out Farthing Bundles to local poor children in the 1930s. Due to its popularity they had to restrict the number of children to those under seven years of age, using the arch as a measure.